The Order was formed in Monroe, North Carolina on March 13,1930. On June 6,1930 the Convent General of the United States of America was formed to administer the Order. Membership in the Knights of the York Cross of Honour (KYCH) cannot be applied for. In order to be considered for membership, a proposed candidate must have served as:

Presiding Officer
of a Masonic Lodge

Presiding Officer
of a Council

Presiding Officer
of a Commandery 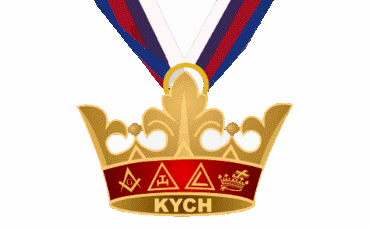 Knights of the York Cross of Honour is a Honor Group of York Rite Masons who are dedicated to serving the Masonic Fraternity as a Labor of Love. No individual should aspire to membership in KYCH, when he has done the required work, and done it well, he will be invited to membership. Those who labor will be rewarded by being invited. After a Mason has fulfilled the requirements of membership, his name may be proposed for membership by a member of the K.Y.C.H.. The prospective member should not know that he has been proposed. When a Priory receives a proposed, such proposal must be held over until the next stated meeting of the Priory before it is Balloted on. Some of the Ballot rules vary in different Jurisdictions, to comply with Grand Lodge Rules and Regulations. In this Jurisdiction the prospect must receive a unanimous vote by secret Ballot. The prospective proposal should not know that his name was proposed until he is official notified that he is elected to be invited to petition to membership. If this rule is followed, no one that is proposed and rejected should ever know that he was proposed and rejected, thereby saving much embarrassment. to everyone.

Any Knight, having served as presiding officer in any Grand Bodies of Symbolic, Capitular, Cryptic or Chivalric Masonry, shall be entitled to the rank and decoration of Knight York Grand Cross of Honour. A Knight York Grand Cross of Honour shall be entitled to wear a quadrant or quadrants on the golden circle of his official jewel, if he possesses one, and within the rays of his lapel button or watch charm as follows:
Past Presiding Officer of Grand Lodge Blue
Past Presiding Officer of Grand Chapter Red Past
Presiding Officer of Grand Council Purple
Past Presiding Officer of Grand Commandery White
The meaning of membership in K.Y.C.H. can best be explained by a closing statement of Most Eminent Knight Donald E. Friend, Grand Master General, at his Convent General Session in 1995 , “As a Knight of the York Cross of Honour, you are a proven servant of the Masonic Fraternity , your inspiration has came from your Past, your duty is in the present , your Hope is in the Future, I ask you always to remember?n all you do , In all you say, In all of your actions, take a good look at yourself, you are someone impression of Freemasonry.